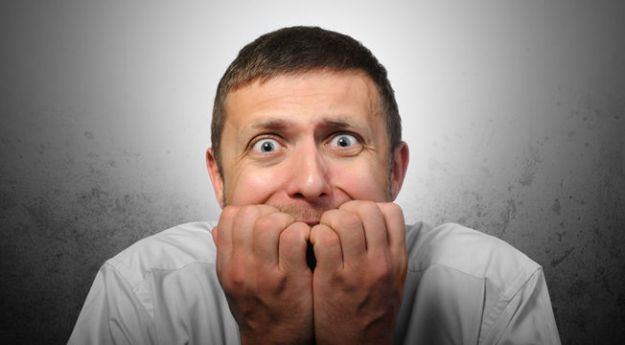 Emails, in his mind, were worse than the most addictive shows on Netflix, global warming, and the possibility of marriage. Like everything that made his hands sweat and his mind work very very quickly, they held the curse of irreversibility. You cannot unsend an email, just as you cannot unwarm the planet and you cannot, without suffering extreme psychological trauma, unmarry or get unstuck from watching that programme about criminals who have sex with other criminals. What has been done cannot be undone.

Any sane, rational creature would accept the logical conclusion of this and be calm. Mistakes have been made, but apologies can follow, grovelling and punishment if necessary, and eventually all can be made well in the world. In no possible email situation does having a high-energy panic attack serve a useful purpose.

“But what if all can’t be made well in the world? What if I’m fired or I explode?”

He looked up to the heavens.

“If only I had been born in a war zone” he thought, “then my constant twitchy vigilance would be of value.”

In general, Benjamin wrote banal, functional emails that made sense and fulfilled their purpose. Like most of the publicly visible content of his life, Benjamin’s email account was predictable and mediocre. But every now and then he would write a bizarre outpouring of emotion so outrageous and jarring that it hinted at the man’s underlying chaos, and suggested that in reality he was an unmoored boat with no rudder and no anchor, all engines on full, hurtling through choppy waters in an endless frothy circle.

He read the email he had sent several times over.

Absolutely fabtastic seeing the new site. I ADORE IT. Savage. I am literally in love with you. Please send help!

The problem was not so much that it was over the top – and this was so far over the top that the top was no longer visible. The problem was that at no point in Benjamin’s correspondence with the developer had there been any deviation from strict polite formality. Greater men than him had been tortured, killed and had their bodies dumped outside the entrances of mobsters’ mansions for less.

“I am insane,” Benjamin Watkins thought. His breathing was all over the place. The screen was blurring as his eyes moistened. He imagined various possible methods of suicide, trying to work out which would be the fastest and least likely to make him shit himself.

“No, no, I’m too pathetic to kill myself” he thought, “I’ll have to sell my car and join a touring band of mariachi players with unusually thick moustaches.” At that moment an email pinged into Benjamin’s inbox.

It was as if a great weight was lifted from Benjamin, and he was suddenly free.

He responded to the developer.

“Oh great fanged hellbeast in the sky,” he thought. He had sent “great” to every contact in his address book!